We want to help you find the perfect car that fits your budget. Please adjust the options below so we can estimate the most accurate monthly payments.

How much will you put down?

Tex Earnhardt, founder and CEO of Earnhardt Auto Centers was born on December 9th, 1930. As a child, Tex moves with his family to Texas for a more agricultural life.
From that point on, Tex was raised on a ranch in the Rio Grande Valley of Southern Texas, establishing his affinity for ranching, agriculture and cowboy culture.

It was in 1951 when he was twenty years old, that he and his family moved to Chandler, AZ; where his father, Hal Earnhardt, Sr. started a small gas station downtown.
The service station provided a small income for his family by selling gas and auto parts. Tex wanted to expand his business to sell automobiles, but the factories in Detroit refused to ship the vehicles to him without expensive transportation costs. Tex went to work and immediately found a solution. He and a friend decided to drive to Detroit, buy a car from the factory, drive both vehicles back to Chandler, and sell the new car. As soon as he sold his first car, he drove right back to Detroit and purchased the second. He repeated the whole process for months.

Eventually his hard work translated into success when factory officials saw how dedicated and strong his work ethic was. Ford Motor Company awarded Tex his own franchise in September of 1951.
To this date, Tex holds the record for the youngest franchisee in the history of Ford. 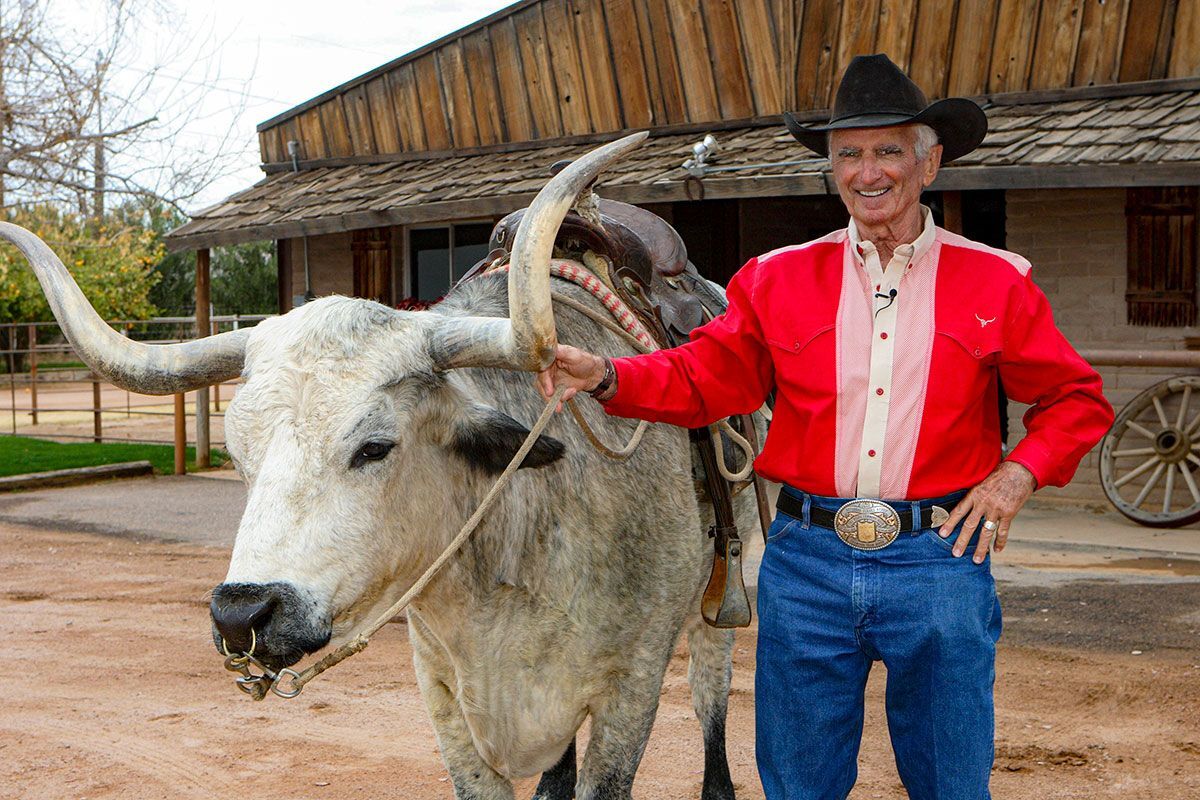 As the dealership grew, Tex became Ford's most respected owner. Lee Iacocca, then a corporate manager, developed a strong relationship with Tex. When Lee accepted the position of CEO for the ailing Chrysler Corporation in the late 70s, he personally flew to Phoenix and asked Tex (and his sons) to become franchise owners. Tex - with his keen intuition and respect for Iacocca - accepted the Chrysler franchise and was soon open for business as a multi-brand car dealer. On the heels of those successes, Tex acquired several more automobile franchises and he became widely known for his great deals and as the cowboy car dealer who rode a bull in his commercials. Tex' trademark slogan "that ain't no bull" was the ultimate truth in advertising. The "bull" he rode in the commercials was really a steer.

Tex' sons, Hal and Jim Babe, eventually joined him in the business as did later, his grandsons, Dodge, Derby, and Bull. Together the Earnhardt family is at the helm of one of the nation's largest privately held automotive empires and is the most recognized auto dealer group in the southwest. Where family-owned and operated automotive companies are a rarity in this market, the Earnhardt family is at their dealerships regularly and personally oversee its operations. Over the years, Earnhardt Auto Centers expanded their operations to include 21 dealers rooftops, representing 23 total dealerships, with 2 of the dealerships in Las Vegas, Nevada. Additionally, Earnhardt operates 2 body shops in Arizona.

The Earnhardt family's dedication to the well-being of their employees is legendary. In hundreds of cases they have personally lent moral and financial support to employees who were facing an illness or family tragedy. The Earnhardts know their success comes from dedicated employees as well as the communities that support Earnhardt; so Earnhardt supports them as well!
Various charities and needy causes have also benefited from the Earnhardt's philanthropy. Upon Tex' passing in 2020, the Earnhardt Family donated to St. Mary's Food Bank, Child Crises Center and United Food Bank to honor his name. In November of 2020, St Mary’s Foodbank in turn created the Annual Tex Earnhardt Charity Food Drive in honor of Tex and his legacy of giving.
Inspired by Tex and the Earnhardt family’s charitable efforts, many of their employees participate in a company charity program called “No Bull Charities-Employee Contributions”, whereby individual donations are voluntarily deducted from their monthly paychecks and donated to employee selected charities on a quarterly basis.

Since 1951, the Earnhardt family has been selling cars and trucks to people across the southwest United States and will continue to do so for many years to come. Although times have changed, what has never changed is the Earnhardt commitment to world class service, famous low prices and the best selection of America's most popular vehicles. Earnhardt -- it's “a name you can trust” …and that ain't no bull!
Follow Earnhardt Auto Centers in social media: @Earnhardt_Auto_Centers on Instagram and EarnhardtAutoCenters on Facebook.